For Terri and Her Sisters

My journey with Terri began before Christmas of last year when she contacted me through my my Etsy Shop asking if I could make some dresses from her grandmother’s hankies. And like a blast from the past there was Terri in my inbox again today. I was thrilled because we had had so many fun conversations along the way …. I recall something about morphing Minnesota rabbits, a sister named Patti that was not born on March 17 and one named Kathy that was born on March 17, pink fairy dresses and memories of snow.
Don’t ask – we won’t tell. 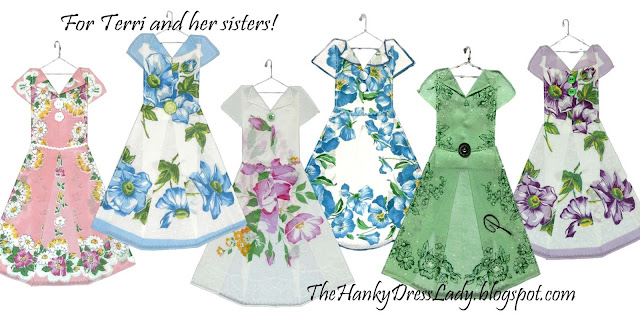 The Hanky Dresses and Hanky Hearts you see here were shared with her sisters. In addition she purchased an additional St. Patrick’s Day Hanky Dress as a birthday gift for her sister who was born on March 17. Terri was so lucky to have bought that one when she did because the very next day its views skyrocketed to over 900 views (not sure why, but it may have been featured on the Etsy Home page).

Anyway – long story short – she wanted to leave feedback on Etsy and that reminded me that I had intended to share her dresses with you all on my blog. Following is what she said when she originally received her Hanky Dresses.

Dear Muriel…love, love, love my little fairy dress! Kathy loves her pink one and Patti is thrilled with the surprise hearts and her pretty dress! Patti got her package yesterday and I got mine today. I was so excited! Once again, your beautiful handiwork is superior! So enjoyed our chats and will miss you! I will be sure and send business your way, if I can! Love, love, love you for bringing our memories to life in a way we can display proudly and see daily! – Terri

This was a very old and fragile hanky with storage damage, edge damage and a hole right in the center. I would guess that it dated back to the 1920's. I actually didn't think I could use it; but continued to experiment with try to hide the holes and damage and finally came up with this rather pixie-like design. Once I decided it was a pixie fairy dress I just had to add some iridescent beads and silk ribbon....and wah-lah!

The Hanky Hearts below were made from the one remaining hanky that could not be made into a dress. I think I managed to add most, if not all, of the remaining family buttons Terri had sent me to work with...a bit of a whimsical touch.

Thanks Terri – it was a pleasure!
I too will miss our conversations.

Posted by The Hanky Dress Lady at 8:16 PM No comments:

And The Winner Is

The winner of our Hanky Dress Giveaway 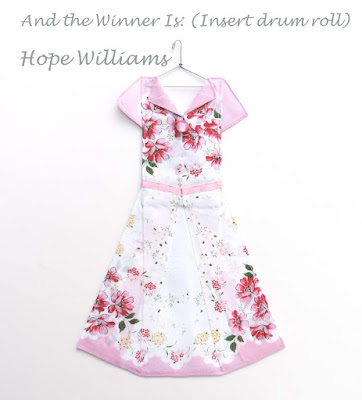 Email ThisBlogThis!Share to TwitterShare to FacebookShare to Pinterest
Labels: All, Hanky Dresses

Kim at Living Vintage and I are hosting a Hanky Dress giveaway. This is the lovely vintage hanky that Kim graciously provided. It is such a sweet classic! A precious pink floral cotton hanky! 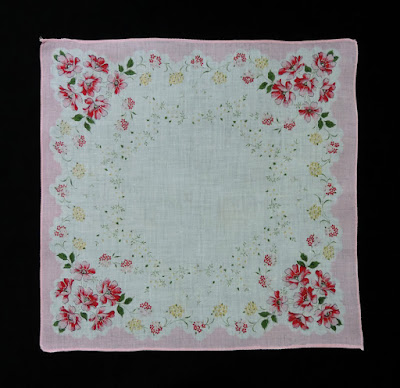 This is the Hanky Dress that I made from it. 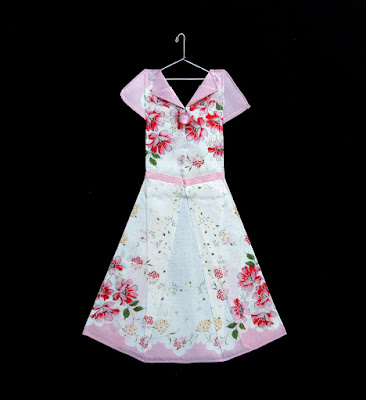 And, this is how you can enter to win it.  Just go to Kim's blog LivingVintageCo to find the complete story about how this all came about and leave a comment. For extra chances to win you may leave a comment on this post or visit my Facebook Page and leave a comment in the post about the giveaway there. The winner will be chosen randomly from all comments received. Giveaway is open to US and Canadian residents only and runs until 9:00 pm on Monday, July 27, 2015.  Good Luck! 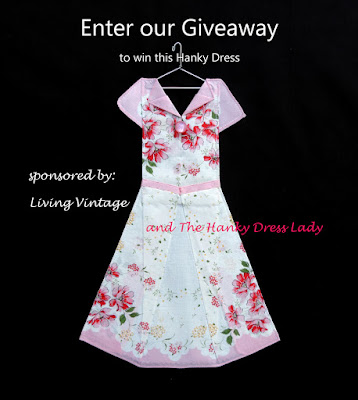 These are Kim's Hanky Dresses hanging in her spectacular laundry room. Go have a look see. You'll find some great decorating ideas!

Several of my customers have also used Hanky Dresses to decorate their laundry rooms.

Some have put them in open Shabby Chic frames on the wall while others have just lined them up on a string to create a sweet grouping. My friend just has two hanging from tiny nails on the wall above her folding drying rack. 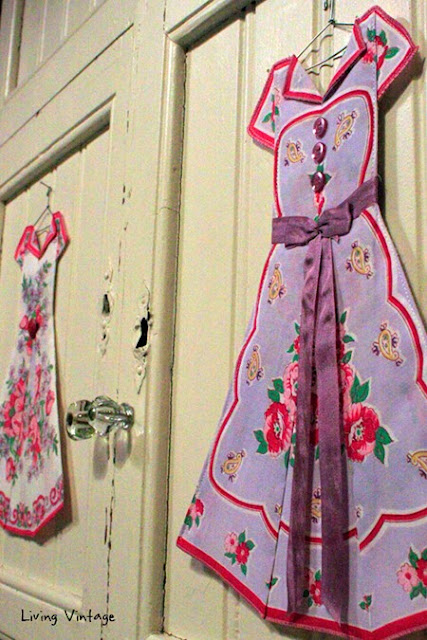 A while back I received a phone call from a lady asking me if I would be interested in purchasing some hankies from her. Of course, I was interested, so we arrange a meeting. As I am looking through her hankies she asks me, "What do you do with them?" I showed her a Hanky Dress that I had brought with me just for this purpose. Long-story-short I ended up making some dresses and hearts for her grand children and friends from the hankies that she had originally wanted to sell. (I also got to purchase the rest.) The brown heart was for her grandson. The dresses are not shown in their relative sizes - I was just experimenting with a new Photoshop technique I learned. Looks like I missed a bit of the hanger on the pink dress. 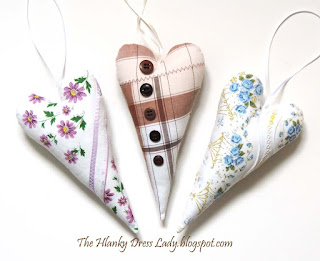 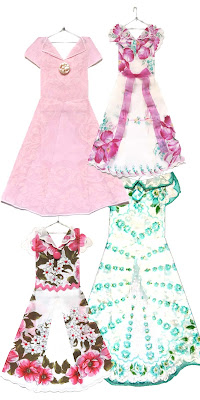 THEN...a couple weeks later, I get a phone call from Nancy and she tells me that she found a couple more hankies that were hers and would I see if one of them could be made into a dress for her. I ended up using both of the hankies she brought me and created a new design technique in the process. I was pleased with the result; and, as you can see, so was Nancy. 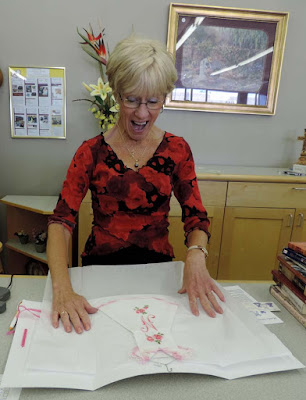 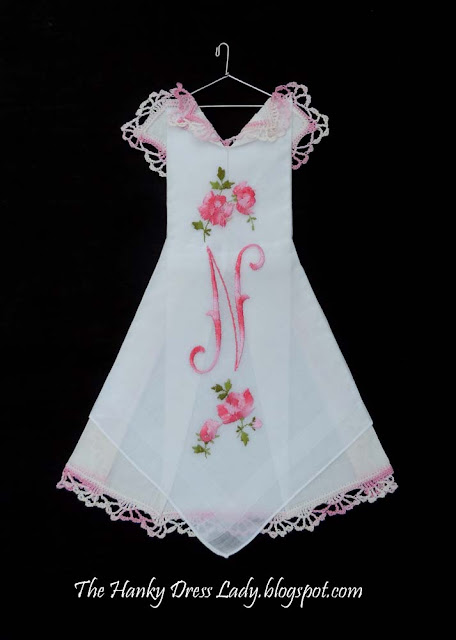 The Hanky Dress Lady
Littleton, Colorado, United States Hi - I’m Muriel, also known as, The Hanky Dress Lady” in my hometown of Littleton. I invented the concept of folding vintage hankies in an origami fashion to create these cute little dresses. I’ve made hundreds of them since early 2007.